A short update about the case of Amsterdam comrade accused of bank robbery by the prosecution of Aachen, Germany. This is to inform that the court dates have been set for the comrade facing repression in Aachen, germany. The trial will begin on the 4th of November, 2016. The court is taking 9 dates over the course of 5 weeks for the entire process.

The call for solidarity is as strong as ever. We will be in the courthouse to show support and on the streets to express our rage and solidarity.

For more information about the case visit: www.solidariteit.noblogs.org

To the peoples and communities in war

To the freed slaves

To those who identify with these sentiments and words…

Today we declare an indefinite hunger strike for total liberation as an act of self-determination, of incitement to widespread revolt. Because we can no longer continue simply going along day by day with the genocide of our communities and peoples.

There is a hidden reality in this society; democracy is a coup d’état that rules not with tanks but TV cameras and reporters’ microphones, democracy governs through the power of its propaganda and we therefore argue that democracy is the art and science that power uses in order to not be perceived as oppression, capitalism is the boss and democracy is its press secretary.

And because of that we are not addressing the media, nor the dominant classes, we’re addressing and speaking to our compañerxs in this immense prison called earth, who like us are also the children of war simply for the fact of being born disinherited.

But these words are not intended to manipulate their rebellious efforts and much less to unify them under any kind of banner; but rather to open a line of communication, a space in tune with the struggles and with all the responses and acts of self-determination that may emerge anywhere…

In our understanding and from our perspective, where authority exists, prisons exist, and that is why prisons are much more than just a physical structure imposed on us through images of walls and barbed-wire fences. Prison, as we understand it, is constituted by society as a whole, while physical prisons are only concrete expressions of the social isolation that sustains and legitimizes power.

Urbanization (for instance) is the same representation of mass incarceration or what is equal to the fortification of urban space, accompanied by the extermination of the most marginalized popular classes and presents itself today as an integral part of the latest geohistorical phase of techno-industrial capitalism. (The latest restructuring effort of this crisis stage where the only way to maintain domination is through war.)

We can no longer believe in their lies because their “wonderful world” doesn’t exist in our midst; they call us criminals just as they called the old inhabitants of the Americas savages and thus justified their genocide; what happens daily in our neighborhoods is a colonial war that seeks to assuage the revolutionary fervor of our people with dirty tactics such as inundating us with drugs and weapons and its subsequent result of bringing more occupation troops into our neighborhoods and communities. All of this is directly connected with the increase in poverty and lack of education and healthcare in the most marginalized communities and neighborhoods. This results in an increased crime rate that justifies repression from the state’s political-military apparatus and prison becomes a monument to the slaughter, the social garbage dump into which those who displease or bother the capitalist system are thrown…

Yet, there are currently 226,000 prisoners in the country, and though the prisons are overcrowded the crime rate doesn’t drop, but on the contrary, it increases or remains stable. Therefore, the problem is not found in the 226,000 people in prison, but in the techno-industrial society that needs to justify the slaughter.

Prison is a business that legitimizes the war on the poor and protects extermination and a society based on capitalist accumulation.

And what is the pretext for the covert interventions? That neighborhoods are devastated by crime, assaults, robberies, killings, and disturbances, “the streets are not safe”, so the mayors and city councils agree with the residents calling for “more protection”, without bothering to analyze the backdrop of this dirty war.

Of course it’s true that those who have fallen victim to drugs are responsible for the crimes happening in their neighborhoods, it is something that can’t be denied. But before we jump in desperation screaming and asking for “more police protection”, better we remember who imposed this plague in our neighborhoods and communities. It would be better to remember who ultimately benefits from the addiction of people to drugs, it would be better to remember that the police are occupation troops sent to our communities by the dominant class, not to protect the lives of poor people, but rather to protect the interests and private property of the capitalists.

The police, politicians and big businesspeople are delighted that working-class youth are victims of this plague, and for two reasons, the first being that drug trafficking is economically profitable and the second is that while they keep our youth on the corners jonesing for a hit, they won’t have to worry about us launching an effective liberation struggle.

The police can’t solve the problem because they are part of the problem, nor can the system’s institutions solve the social, economic and political problems of the people because they are the ones who create and feed them. The “war on drugs” is nothing more than a counter-revolutionary doctrine charged with maintaining and strengthening the domination, exploitation and imprisonment of the most oppressed classes of the proletariat.

We are the only ones capable of eradicating the plague from our communities and so, instead of collaborating with this sick and decadent society we’ve decided to live on the margins of it in order to build a world with our own hands. This requires the revolutionary organization of the people.

Liberate a space, squat, arm yourself and take care of yours.

The more these actions happen in a haphazard and disordered way, without any center, but rather becoming thousands of centers, each one self-determined, then it will be much less susceptible to formalization and recuperation by the technological system.

We live in a technological era in which capitalism has restructured itself through applying technology to the system of social control and all of that has changed the world in a substantial way.

A virtual reality of fictitious needs has been imposed, and the interests of the proletariat have been broken into thousands of pieces, lost in the meanderings of virtual reality. Democracy itself is a virtual reality just like all the others.

It’s clear that a system like this cannot be defended except by transforming the very people who live in its territory into the police of the system. No repressive apparatus would be capable of safeguarding such a system.

And that’s why the state/modern-technological capital can only be destroyed in its territory through the widespread rise of insurrection.

The answer then doesn’t happen within theories, but concretely in the demands and needs of those excluded by the system, the insubordinate, ultimately, the socially lynched who are the natural result of a society divided between the privileged on one side and the subjugated on the other.

Rebellion is also a natural event that wasn’t discovered by anarchists or any other revolutionary.

But this rebellion is not immediately traced back to the old “revolutionary” programs and manuals, the rebellion of our days is unsettled, disorderly, an end in itself.

For us, as social rebels, insurgency is a total rejection of ideologies looking to be a fundamental part of the system that oppresses us.

Equipped with this method based in the practice of direct action, in permanent conflict and in the self-organization of struggles, without the acceptance of moderators, endless possibilities open up for insurrection to flow.

From this perspective it is clear that anarchism is not an ideology but a concrete way of opposing the existent and for its definitive and total destruction.

We are for permanent revolt, for widespread insurrection; it is the only way to make it impossible for centralized power to appear.

We issue this war cry, a way to defend the struggle of the prisoners in the United State and at the same time we are in solidarity with the African-American compas who, like us, live in the genocide of drugs.

Solidarity with rebel peoples and communities.

For total liberation! For the destruction of the prison society!

Three years since the imprisonment of Abraham Cortés Ávila, October 2, 2013. 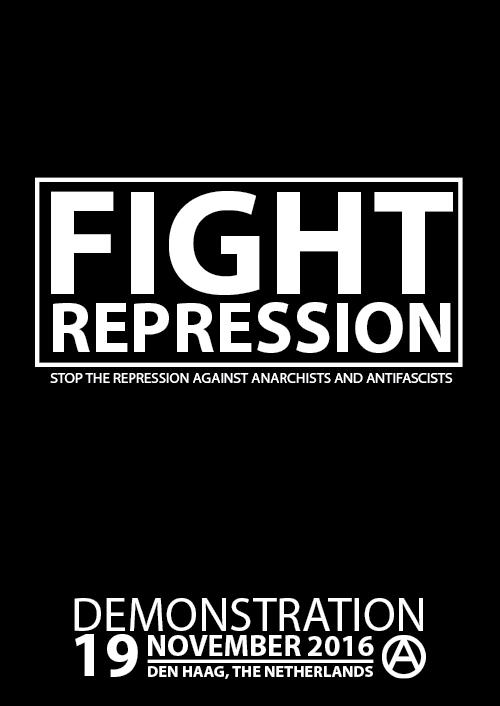 The Tattoo Circus is a DIY organized festival against repression and imprisonment. The Tattoo Circus began 2007 in Rome and since then activists from all around Europe (Barcelona, London, Thessaloniki, Bern, Athens, Madrid, Basel, Berlin… etc) took on the concept for supporting those people who can’t be among us. We are happy that this event will take place in Amsterdam as well and are sure it´s going to be an inspiring festival.

The idea behind this solidarity event is to create a space where tattoo culture and political involvement come together. Several tattoo artists will provide their creativity, experience and as much ink as possible, in order to support the anti-prison struggle and to become a part of it. The principle of the Tattoo Circus is that nobody earns anything from this event, neither the tattooists, nor the piercers, the bands, performers or speakers, and the complete proceeds will go to those people who fight against the state and capitalism.

Every euro collected in Tattoo Circus goes directly to structures supporting prisoners and the Anti-Prison-Fight. Tattoo Circus won’t limit itself to the tattoo culture, therefore, a rich program is being prepared. It will include lectures, workshops, readings, info about prisoners, movies and so forth. We’ll also have an evening program with concerts, and there will be food and drinks.

As opposed to some established conventions, Tattoo Circus takes place in a non-competitive, non-commercial an non-hierarchical atmosphere and entrance is free for everyone.

We invite you to join, help and enrich this project. The full program will be published shortly.

Solidarity is a weapon. Until every prison is empty. For a society without prisons and repression!